CloseClose
0 Items
About Us 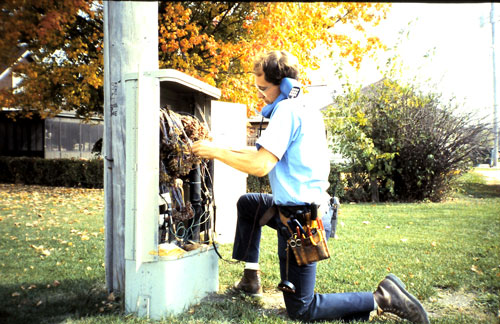 In 1905 the Kalona Mutual Switchboard Company was founded to provide organized switching services to independently operated farm lines, as well as to the town and surrounding county lines. The board of directors was comprised of eight people: four directors from Kalona and the president of each of the four farm lines. Cord board, the technology of the time, was run by an operator who was on duty 24 hours a day. Although the system may seem primitive in this age of advanced calling features and wireless communications, they had caller ID (the operator knew everyone in town and who was calling), conference calling through party lines, distinctive ringing, and call forwarding (the operators always knew where the doctor and veterinarian were).

In 1930, the Kalona Independent Telephone Company came into existence. It handled the rural lines, each of which has its own officers. Annual switching dues were $7.00 to each of the 186 customers. In 1946, the two companies merged to form the Kalona Cooperative Switchboard Company. Membership dues were $10 per year per main phone number. Each customer of the cooperative became a shareholder with one vote. This system is still in place today and keeps KCTC a local interest company. 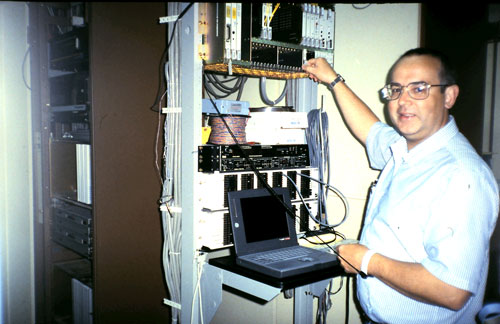 In 1950 a new office building was constructed at 510 B avenue, and in 1951 a new automatic drop switchboard was installed that eliminated the need for customers to crank their phone to connect. Ten years later, an automatic dial system was installed, and the old multi-party rural lines were replaced by metallic eight-party lines. These new lines replaced the need for batteries in phones due to a 48DCV power output from the company to the customer. That is why your phone still works when the power goes out. KCTC has a back-up generator that provides power to the phone lines.

In 1976 the company completed its evolution from eight-party metallic lines to single party service, and buried all of its outside plant. Having the entire network of service lines underground cut maintenance by nearly 80%. That same year KCTC bought all long distance access lines from Bell Telephone System. This meant that KCTC owned the rights to all lines going in and out of its switch, bringing a new level of self-sufficiency and revenue control, as well marking the company’s first steps into global telecommunications.

By 1979 KCTC had become the most advanced telephone company in the area, which included Northwestern Bell, General Telephone, Continental Telephone, as well as independent companies. It offered many new services to its customers: answer and transfer, answer record and transfer with remote control, call diverters, automatic dialers, hands-free speaker phones, decorator phones, and paging systems. 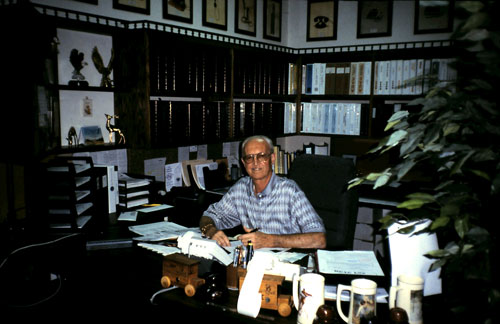 A new era for the Kalona Cooperative Telephone Company began in 1980 with the construction of a new $250,000 facility at 510 B. Ave. The 8,000 square foot building more than doubled the size of the existing facility, and today it still houses expanded office space, a service garage, warehousing space, a conference room, and a display lobby. A new DCO Stromberg-Carlson switch was installed in May of the next year to replace the old step-switch technology. This digital/analog combination switch allowed KCTC customers access to many new custom calling features. The expanded services included: call waiting, call forwarding, conference calling, 30 number speed dial and others. KCTC hosted the training classes for this new technology that was attended by five other Iowa companies. Also installed was a new IBM computerized records management system, the first of its kind installed in a small Iowa telephone company. These new features facilitated a local resident rate increase to $7.50 per month.

A new concept to the telecommunications industry in the late 1980’s and early 1990’s was convergence: the merging of telecommunications with multimedia formats. General manager Ray Marner, working closely with the board of directors, researched how to bring convergence to Kalona. To that end, many avenues of integrated multimedia were explored, along with ever-changing telephone technologies.

KCTC received a cable TV franchise from the town of Kalona in 1981. KCTC’s mobile phone system in Iowa City was also installed and made operational. Called Business Band Frequency, this technology combined 2-way radio systems with telephone operations. The paging system was put in place and running in 1987; the area covered went across Olds (south), Cedar Rapids (north), Sigourney (west) and Muscatine (east). The tower and 10 frequencies in Iowa City are still owned by KCTC.

The board of directors approved a progressive 10-year plan in 1991 that pushed the company toward an all-fiber network and interactive video service delivery. Other services, such as video-on-demand, home shopping, high speed data, and home banking were also discussed.

In 1993 the Kalona Cooperative Telephone Company constructed a new building adjacent to the existing facility to meet some pressing needs of the community. The 5,600 square foot building was built to be fully handicapped accessible, with a large lobby area, an office for the Kalona Chamber of Commerce, rental offices, large public rest rooms, and a 100-person capacity multipurpose room. Currently 3,200 square feet of this new building is being leased by the Kalona Chamber of Commerce as a tourism center. The rear of the building has 3 garage stalls, one vehicle wash room and an equipment repair room that is used by KCTC.

In recognition of the library’s vital role in the community, KCTC donated $4,000 to the Kalona Public Library for the purchase of a new computer in 1993.

Installation of toll backbone fiber for optical network units (ONU) sites began in 1996, and soon all toll traffic was routed over the new redundant fiber route.

Early 1995 saw another major change in the KCTC. The board of directors approved an ambitio

us 5-year plan to bring Kalona to the cutting edge of technology. The proposal detailed plans to bring fiber optic service to all of KCTC’s customers. At the same time, some national telephone companies were planning to begin operation of their voice and video networks, but didn’t plan to include Iowa until years later, and then only to urban areas. Seeing it as an economic development tool, the Kalona Cooperative Telephone Company’s plans would bring fiber to its mostly rural customers much sooner. 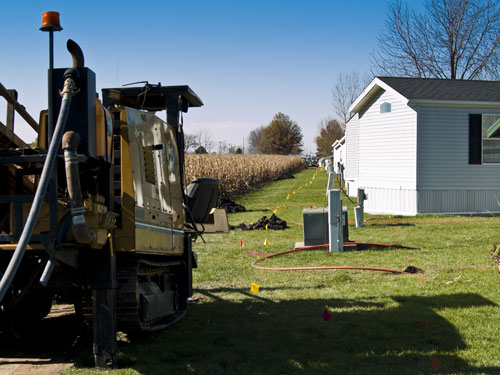 Installation of the fiber backbone and major ONU sites were also completed in 1997, as well as the installation of a telephone system and wiring at MP Elementary, including 23,000 ft. of wire, most of which was donated by KCTC. Work then began at Mid Prairie Middle School on data and telephone networks. KCTC also donated money to the Kalona Public Library to purchase additional terminals. Internet classes taught by KCTC staff members began at the Kalona Library free of charge to all of the Kalona community and surrounding areas.

Iowa Wireless Services announced its partnership with the Kalona Cooperative Telephone Company in 1999, bringing digital wireless service to the area. Built-in features of the service would allow customers to send and receive e-mail, voice mail and text messaging all in one unit. KCTC replaced outdated copper lines to Wellman and to Sharon Center/Hills exchanges with fiber optic cable, and continued to deploy fiber in other areas throughout the exchange.

In July of 2000 a PCS tower was completed to include the town of Washington in KCTC’s expanding digital wireless coverage. KCTC partnered with three established local business in Washington to support the growing PCS customer base in that area.

Today KCTC continues to push the envelope in telecommunications, by expanding capabilities to include the deployment of KCTC Broadband within the entire Kalona exchange. That system, in turn, has the capability to be expanded to deliver television programming over the same copper pair. The possibilities are endless.

From its small beginnings in 1905, the Kalona Cooperative Telephone Company has grown into one of the most advanced telecommunications companies in the state. In a rural Iowa town known for its 19th century charm, KCTC has positioned itself as a progressive provider of affordable, quality services as well as the latest advanced technology.